Donnie and I ventured south over the weekend to do some exploring, and lots of eating, in lovely Melbourne. We have now officially visited half of Australia’s states! However, that isn’t quite the accomplishment that it would be in the US, as Australia only has six states (and two territories, if we’re getting technical).

We spent two days in the city and one full day exploring the Great Ocean Road. I’m writing a separate blog post for the Great Ocean Road, as it was full of amazing things (like spotting a wild koala!) so today I’ll focus on our time spent directly in Melbourne.

After finally arriving in the CBD (we flew on a cheap airline that flies to an airport about 45 minutes outside of the city) we immediately headed to a little cafe for brekkie. We had delicious bacon, egg, and cheese toasties (a departure from the ubiquitous bacon egg rolls of Sydney) and flat whites before dropping our bags at our hotel. We headed straight for the Queen Victoria Market, which was only a 5 minute walk from our room. The market reminded me a bit of the straw market in Nassau, only with laid back vendors and no one screaming at you for looking at their bags and then buying from someone else. We had fun picking out some cute things for people back home and Donnie even got a custom leather belt from an adorable older gentleman. 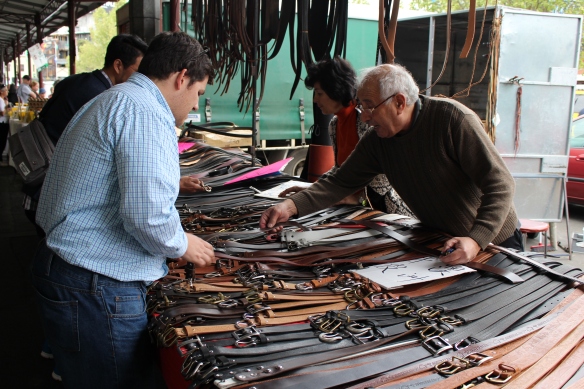 We planned to ride the City Circle tram, as it is free and provides audio commentary of major areas around the CBD, but it was suffocatingly packed so we skipped it. Speaking of trams, because they run down the middle of the streets, there is this terrifying traffic pattern called a “hook turn” that only happens in Melbourne: when turning right (remember that cars drive on the left here) at an intersection, cars go out into the middle of the intersection all the way over on the left, and then turn right across all of the lanes, while watching for cars going straight to blow past. It’s scary to watch and even scarier to experience. 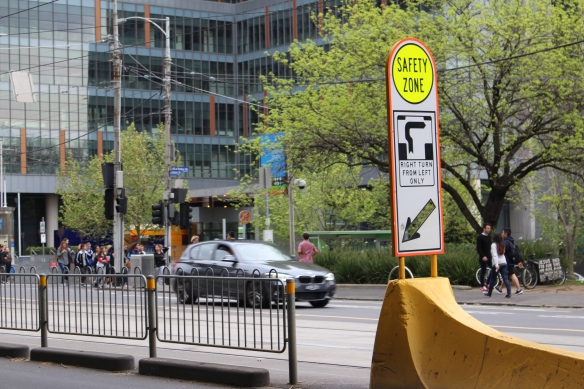 One of the fun things about Melbourne are the random alleyways and side streets with restaurants, bars, and cafes tucked away. We found a cute little side street with globe-lights and outdoor seating for several restaurants for lunch. Donnie picked a place called “Bread and Meat Co.” (Ron Swanson approved) and I ate sweet potato fries while he had a Texas BBQ Chicken sandwich– they were celebrating their new “American” menu.

After lunch, a Little Cupcakes indulgence, and a little rest in our room (catching a 7:00 am flight when you live an hour from the airport requires a pretty early start time!) we wandered over to Federation Square and the Flinders St. railway station. This turn-of-the-century station is gorgeous. It’s also home to a “pedestrian scramble” which essentially stops traffic in all directions at once and allows pedestrians to cross at every crosswalk, including diagonally. We eventually landed at the rooftop bar of Taxi Kitchen, with great views of the Yarra river that runs through Melbourne. 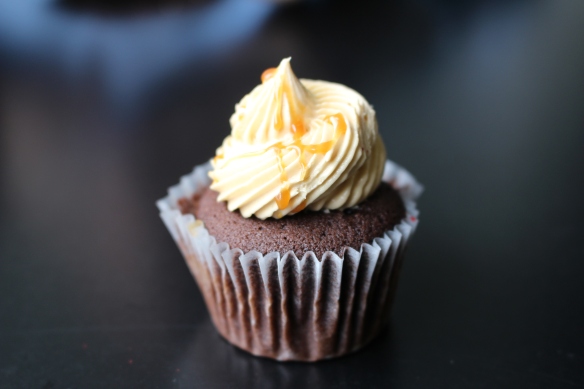 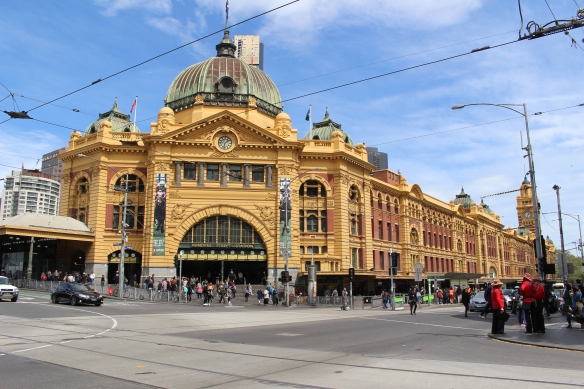 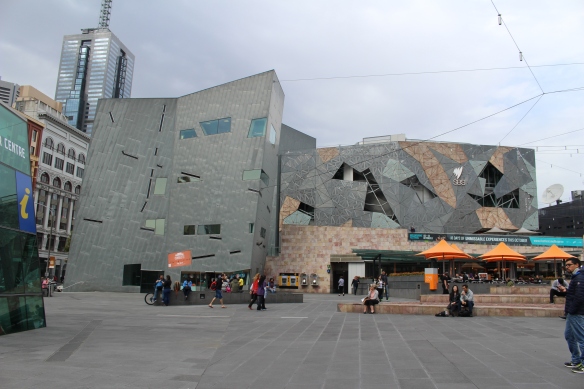 For dinner (I really wasn’t kidding about all the eating) we headed up to Carlton, a cute, leafy neighborhood adjacent to the CDB and home to Lygon Street. Lygon Street houses all the best Italian restaurants, and we had reservations at Da Guido La Pasta. In order to understand the level of my delight at the enormous, fragrant dish of homemade, traditional Italian pasta that was set before me, you must first know that I have not had one single bite of pasta in over six months. This was a heavenly experience. 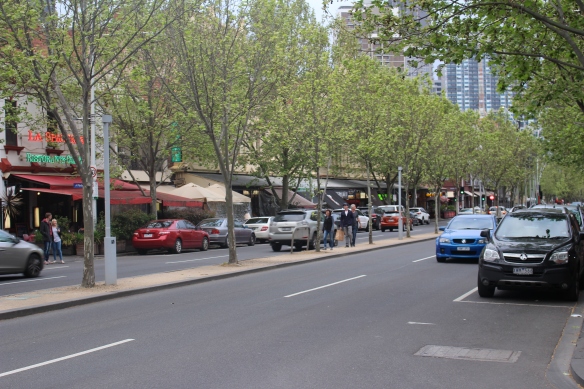 In addition to their fabulous, authentic Italian restaurants, Melbourne is also home to numerous cake shops. We ventured to one of the most famous, Brunetti, after our dinner. Thankfully we got in a bit of a walk on the way, so I was able to enjoy two miniature treats. The bright, white marble flagship store on Lygon Street was bustling at 9:00 pm. We walked in, took a number for our turn to order, and perused the cases that were filled with mignons (mini-cakes and treats), cake slices, cheesecakes, macarons, cannolis, eclairs, and every dessert imaginable. I ended up with a mini nutella cannoli and a nutella and ricotta mignon while Donnie indulged in two opera slices. We ended our evening on our hotel balcony overlooking Flagstaff Gardens, tired from a day full of exploring and so many delicious carbs. 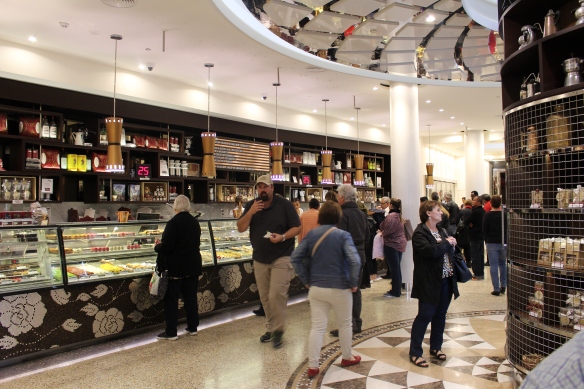 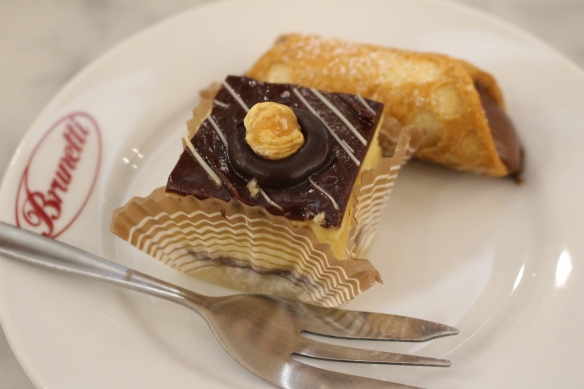 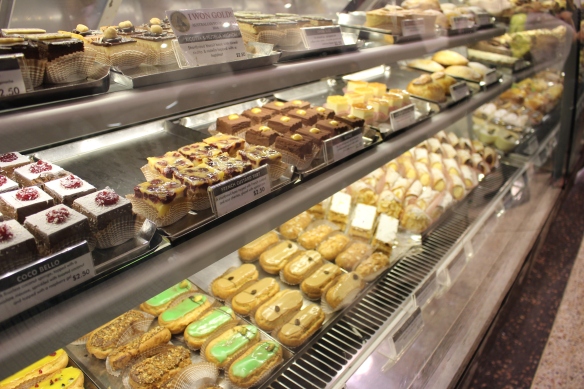 We spent the first part of Sunday morning listening to the Vols game on the radio as the illegal stream we were watching annoyingly turned into a baseball game. The game, which started at 6:30 am, was headed to overtime at the exact moment we had to check-out, which wasn’t great for Donnie’s nerves. I accidentally caught this moment when Tennessee failed to score a TD in the first OT… 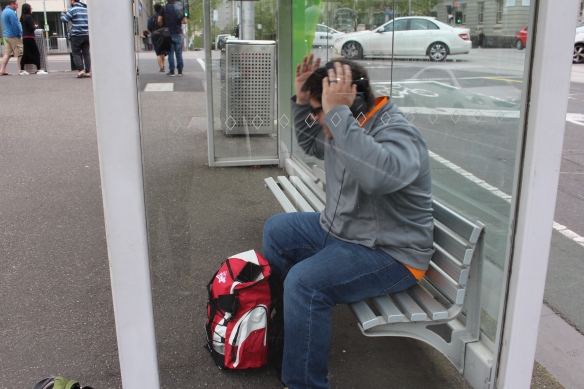 After a disappointing loss (but overall impressive comeback attempt by the Vols) we headed back to the Queen Victoria Market to buy some things we had passed up on Friday. There were intense 45 mph winds that made walking quite the challenge. You haven’t experienced “wind” until you’ve been to Australia. We managed to make it to the Greek Precinct and took a break from the blustery outdoors for some of the best (and most garlicky) hummus I’ve ever had at a cute little place called Stalactites, complete with stalactites hanging from the ceiling!

Melbourne is known as one of the greatest street art cities in the world. One of the most famous laneways of street art is Hosier lane, which we happily stumbled upon because Donnie somehow has a weird sixth-sense for spontaneously finding places when we travel. This area reminded me a lot of Seattle. There were a few artists painting as we were walking by, and you could even pay to spray paint something yourself. Pretty cool!

We decided to check out The Crown, Melbourne’s fancy casino in Southbank. (Fun side note: the hotel attached to the casino, Crown Towers, is where Tiger Woods was busted by his wife for being a cheating loser.) The casino is luxurious and so clean with no smoking on the main gaming floor. Donnie found this super fun pokie (what Aussies call slots) called “More Chilli” and we ended up winning $200! We cashed out after that happy turn of events.

The last thing on my Melbourne “to do” list was to photograph the bathing boxes at Brighton Beach. We caught an Uber to the quiet beach town about 20 minutes outside the CBD and after almost having the door smashed off our driver’s car when the wind blew it wide open into oncoming traffic, we made the short walk down to the iconic boxes. If you’ve never been on a beach in super strong winds, I would recommend keeping it that way. You could hardly see the water due to the “fog” of sand being swept up by the wind. The sand stung our faces and our eyes, filled my jacket pockets, and became permanently embedded in our scalps, but I got my pictures of the colourful boxes! Was feeling like Princess Jasmine when she’s trapped in that hour glass at the end of Aladdin worth it? Maybe not. But it made for a good story and some cool pictures! 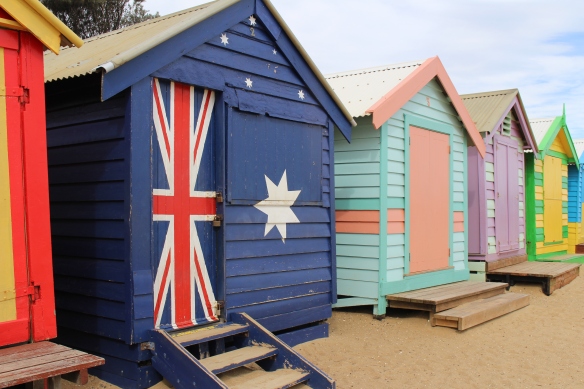 Overall, we really enjoyed Melbourne. The food was amazing and the city has a casual, hip, slightly gritty vibe that is very different from Sydney. We were planning a return trip while still there, which I think is a sign of a great city! Besides, how can you not feel drawn, as a Nashville native, to a city that has its own Batman building? It almost felt like home.