The Lone Pine Koala Sanctuary is one of the most peaceful, happy places I’ve ever visited. The Sanctuary was our top priority for our weekend in Brisbane, and we couldn’t have asked for a better day: sunny, nice breeze, high-70s (I’m still just not getting the whole Celsius thing.) Lone Pine is about an hour bus ride from Brisbane CBD and we were lucky to get on the bus first, because it was quickly packed with (mostly) tourists heading to the land of koalas.

The Sanctuary is very spacious and shaded by so much greenery, you really feel as though you were in the forest, encountering these animals in the wild. They have giant Cockatoos and laughing Kookaburras right at the entrance, although both have become commonplace to us, it’s kind of like seeing a deer at a zoo in the States. (Cockatoos are pretty, but they make the most awful screeches you’ve ever heard!) We also saw some “flying foxes” (actually bats) and a few other Aussie birds.

The Dingos were going out for a walk when we arrived. They really look just like domestic dogs, and we were able to pet them– even if Donnie was a little scared to until a two-year old jumped right in. We obviously couldn’t resist a few Dingo quotes: “Maybe the Dingo ate your baby” (Elaine on Seinfeld) and “alligators, dingo babies” (Kevin on The Office) our favorites. (I had to watch the clip of Kevin’s Aussie accent again just now. Do  yourself a favor and watch it.)

One of the highlights of the Sanctuary was actually seeing a duckbill platypus! Usually these guys are hibernating or hiding, so we had yet to see one at any of the other zoos we’ve visited. This platypus was swimming up a storm, and so weird looking! Donnie decided it looks like a cross between an alligator and a beaver, which I think is pretty spot on. He was a lot smaller than I expected, and impossible to photograph!

The main draw of Lone Pine, for us anyway, is that is one of the few places in Australia where you can actually cuddle a koala! The koalas are protected and closely monitored– each koala is only allowed to be cuddled for 30 minutes a day, and they are very serious about switching them out when their time is up. Unfortunately for us, our koala was on the very end of his shift and did not really want to be cuddled. We persevered and got some terrible pictures, but holding the little guy was an experience I won’t forget. You basically are told to “be a tree” and keep your hands locked and low, not moving even if the koala decides to move. 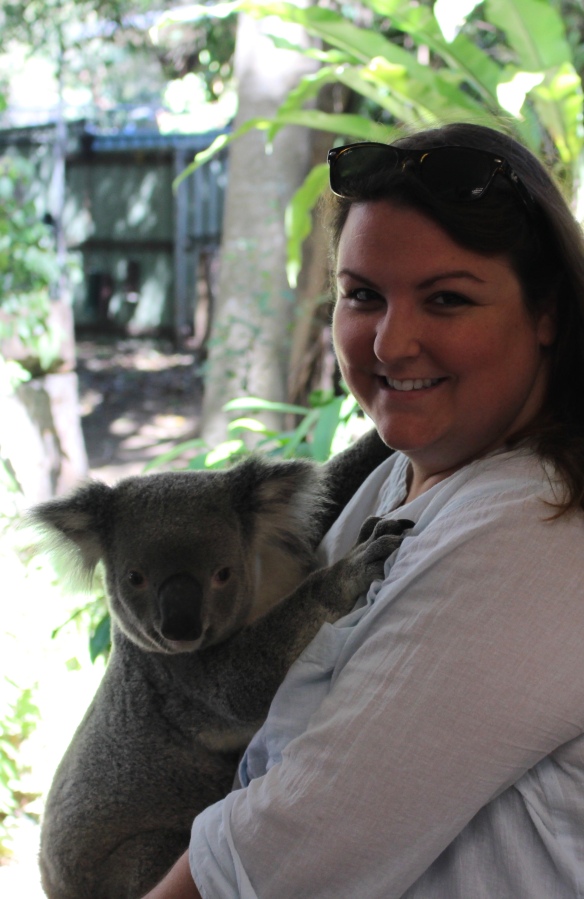 When it was Donnie’s turn, our little guy actually tried to climb him! Their claws are incredibly sharp, so Donnie had a few scratches on his shoulders and some holes in his shirt by the end of it! I think Mr. Koala was ready to go back to nap time.

After cuddling our antsy koala friend, we headed over to the kangaroo and emu enclosure. There are dozens of kangaroos and several emus who just hang out and wander around the large open area, and visitors are permitted to walk among the animals. You can even feed the kangaroos if you buy food in the visitor center. 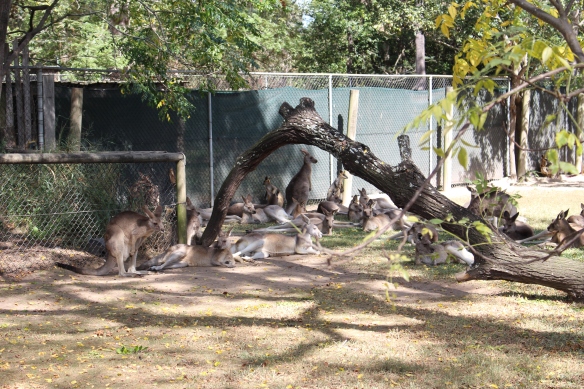 We spent some time just walking around, soaking up the glorious sunshine, and watching these fascinating animals hop around and lay down for their naps. We even saw an emu running full speed down the hill toward the entrance gate, which was terrifying. Giant birds not my favorite.

There are several animal encounters and animal shows on daily, and we were happy to catch two: the birds of prey and the sheepdog show. The birds of prey show was fantastic! They bring out different birds, or have them fly up from a trainer down the hill, and you get to see them in action– diving for food, soaring, and, if you’re me, hitting you in the face with their wings as they fly right past you! 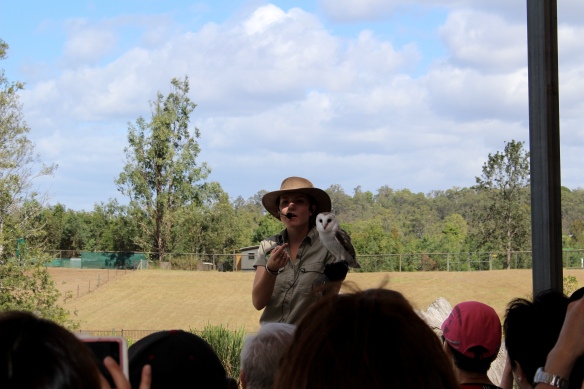 The most impressive bird was the peregrine falcon who can dive at speeds up to 400km/hr and kills its prey on impact. Apparently these falcons even lurk around in cities in Australia because of the abundance of pigeons! The keeper giving the talk was really great. She told us about the different birds’ personalities and temperaments, and was very engaging and entertaining.

After the bird show, we walked across the paddock to the sheep enclosure. Here we got to see a Border Collie and an Australian Kelpie herd the sheep. They were so cute, and so good at their job! The sheep would try to run away, especially two cheeky sheep who kept trying to sneak off, but the pups would circle back and get them every time. They moved the herd through an obstacle course and down into the pen. If you wanted to stay after, they did a demonstration shearing the sheep as well. 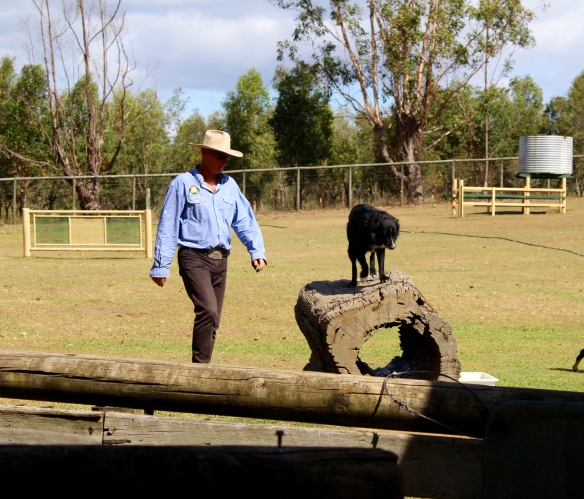 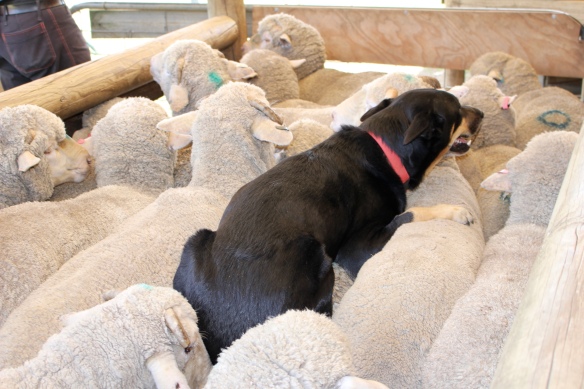 By mid-afternoon we had visited all of the animals, cuddled (and been wounded by) a koala, been hit in the face by a flying owl, and seen an impressive sheepdog show. It was time to head back into Brisbane, but we truly loved our time at the Lone Pine Koala Sanctuary, the highlight of our trip! If you find yourself in Brisbane, the Sanctuary should be at the top of your list!