Koalas are hilarious animals– with their fluffy ears and weird noses and squishy old man faces, I was looking forward to seeing them more than almost anything in Australia. Donnie and I decided to visit the Sydney Wildlife Park in Darling Harbour to visit with these cuties, as well as heaps of other Aussie-native wildlife. We took the (slow) ferry to Circular Quay, hopped on the train, rode a few stops, and then walked about 20 minutes through Darling Harbour to the park.

We hadn’t ridden the trains yet, but were pleased at how easy the lines were to navigate and especially how clean and cool the trains were. They are also two stories, which is kind of fun and also keeps the cars from getting super crowded.

Darling Harbour is named after a former governor of New South Wales, Ralph Darling, who changed the original name “Cockle Bay” to Darling Harbor to honor, well, himself, in the 1820s. It was an absolutely beautiful day and the Harbour was decorated with hearts from the recent Mardi Gras celebration. 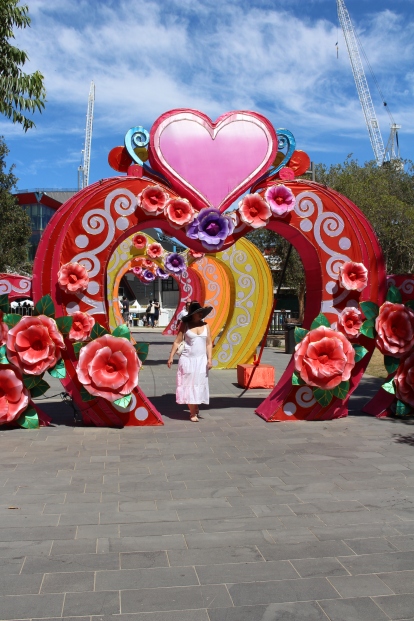 We bought tickets to the Wildlife Park, and paid $25 extra for a “koala encounter” and photo op with the cute little furry guys. Inside, there were all sorts of Australian animals including: lizards, pythons, wallabies, kangaroos, the most massive crocodile I’ve ever seen, bilbies (also known as rabbit-eared bandicoots), a cassowary (giant emu-like bird that can run at speeds up to 30 mph), and of course, the koalas. 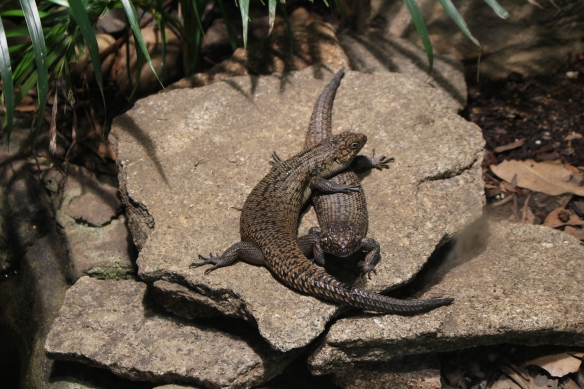 This little wallaby was staying out of the heat and just chilling. 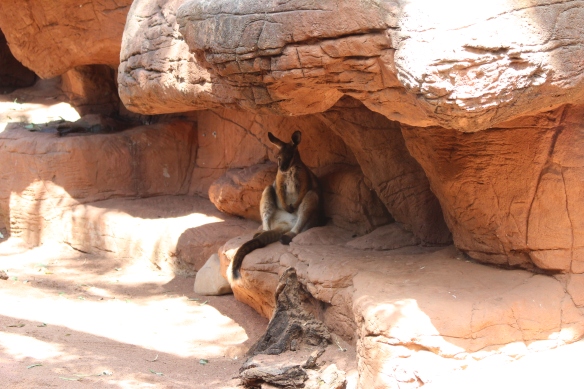 The cassowary is a rather endangered species, very rare to find in the wild as they are few in number and also very wary of humans. You may notice this bird resembles the bird character “Kevin” from the movie Up. I felt like this one was about to come running at me. 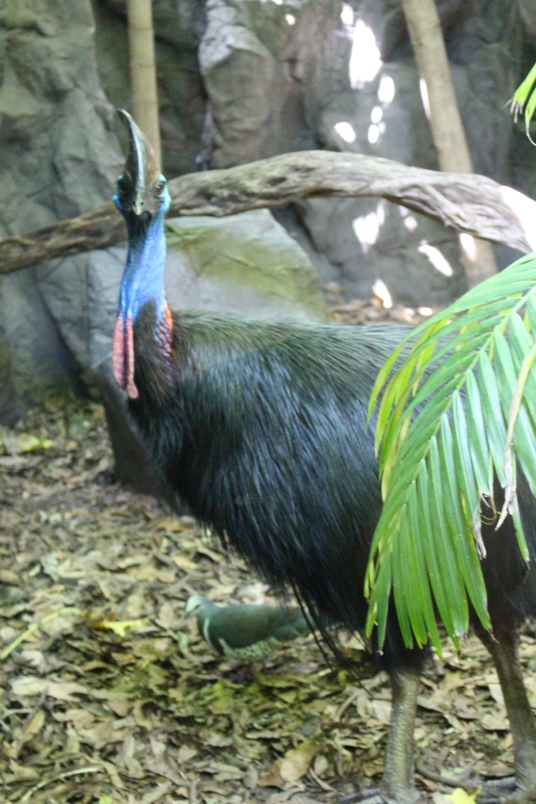 Rex, the resident croc, was huge and terrifying, but really enjoying the sun. 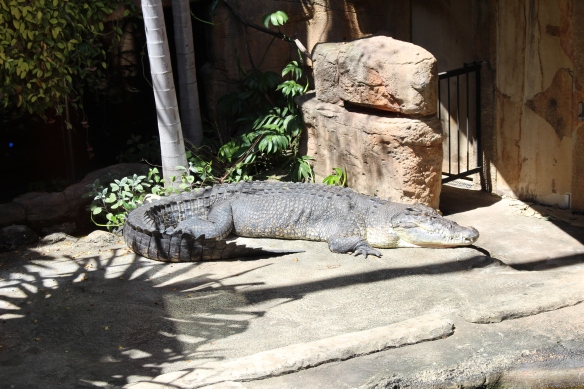 This little guy, a bilby, was so cute, but very difficult to photograph as he was in a really dark habitat. These little bandicoots are nocturnal, and share their habitat with adorable field mice who ran around too fast to capture at all. 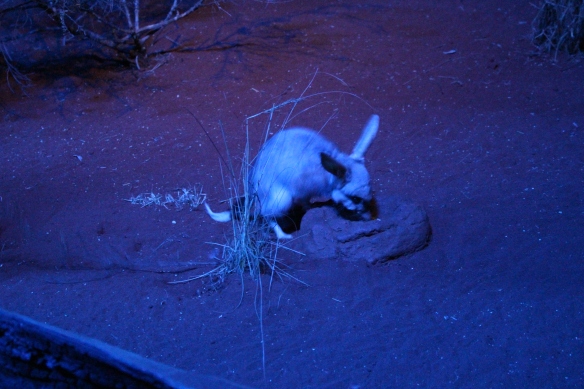 Donnie hated this python– but I’ve never seen a snake just hanging around like this! Hopefully we never actually cross paths with one of these in the bush. 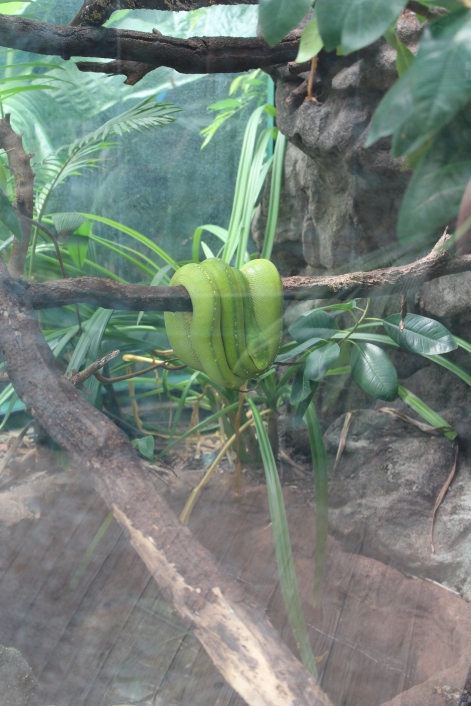 At the very top, or end, of the park is the koala enclosure. This zoo has 5 koalas, the oldest of whom is 9. We learned that koalas sleep for an average of twenty hours a day, and spend the other 4 hours eating. They also have a large, flat plate in their rears that allows them to sit or wedge down in tree branches for long periods of time without falling out.

We also learned that efficiency really isn’t something Aussies are too keen on. When we purchased our tickets before entering the zoo, we paid for our koala experience. The lady told us to take our receipt to the koala kiosk to arrange our encounter. When we got to the koala exhibit, the zookeeper told us to stand in the concession queue in order to get an armband so we could enter the koala exhibit. We stood in the line for a few minutes, while several tourists tried to order, until a different worker told us to go to the kiosk inside to get help. We walked up to the kiosk where we saw a sign that informed us the till was currently closed, and we should get help at the concession stand. A guy walked up, we explained that we just needed arm bands, and he told us to meet him by the concession window. We walked back out, but he never came out or showed back up, so we got back at the end of the original line and waited another 10 minutes or so. When we finally got to the till, the man just popped out a wristband and marked off our receipt to show that we had paid. Why couldn’t they do that when we paid in the first place? No clue.

When we finally had our wristband, we walked up to the koala enclosure and the keeper let us in for our meet and greet with the little fuzz balls. Almost immediately we were ushered back out, because it was now time for the keeper talk and we needed to wait until that was over. We thought we would never get to meet them! We actually learned a lot from the talk which was very interesting, and we did finally get to go into the enclosure for our koala face to face. 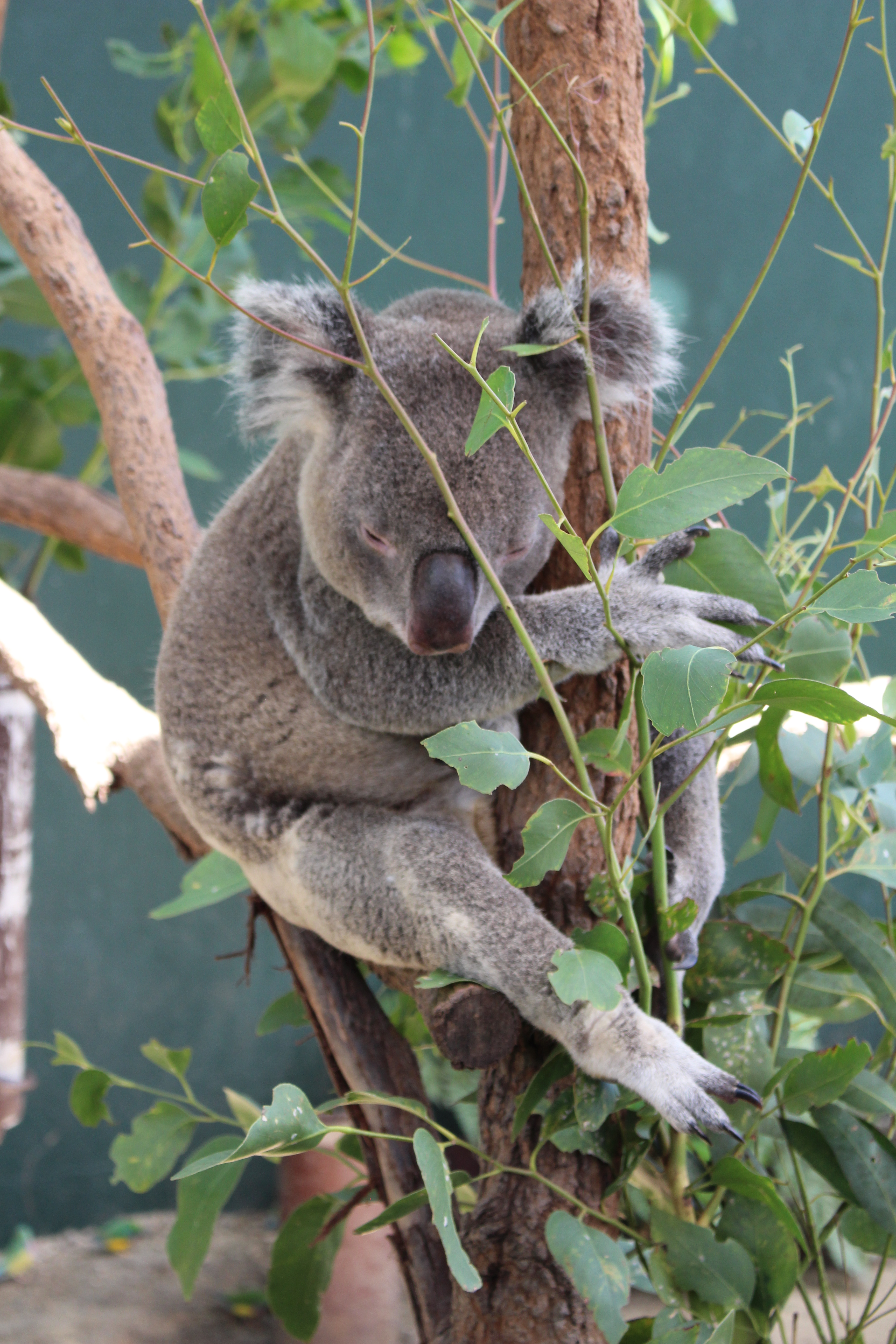 While balancing precariously on tall step stools to get closer to Erica, our photo op koala, the keeper giggled from behind her camera and said to me, “Don’t look now, mate, but you’ve got some koala poo on you.” Umm… I definitely looked. Thankfully, koala poop is hard like an acorn and brushed off with no incident. However, as Donnie was taking his individual picture, he got bombarded with poo pellets. Apparently Erica wasn’t too keen on us interrupting her nap for our photos. 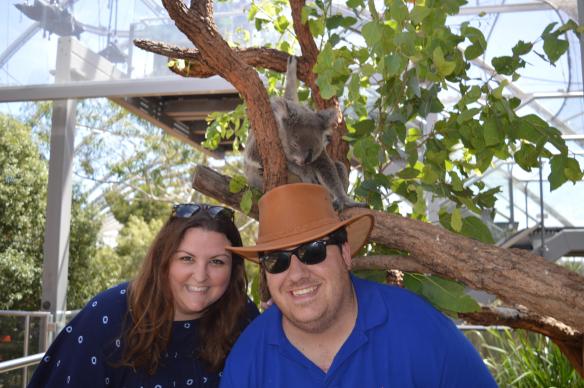 If you look closely, you can see the impending poo headed for Donnie. 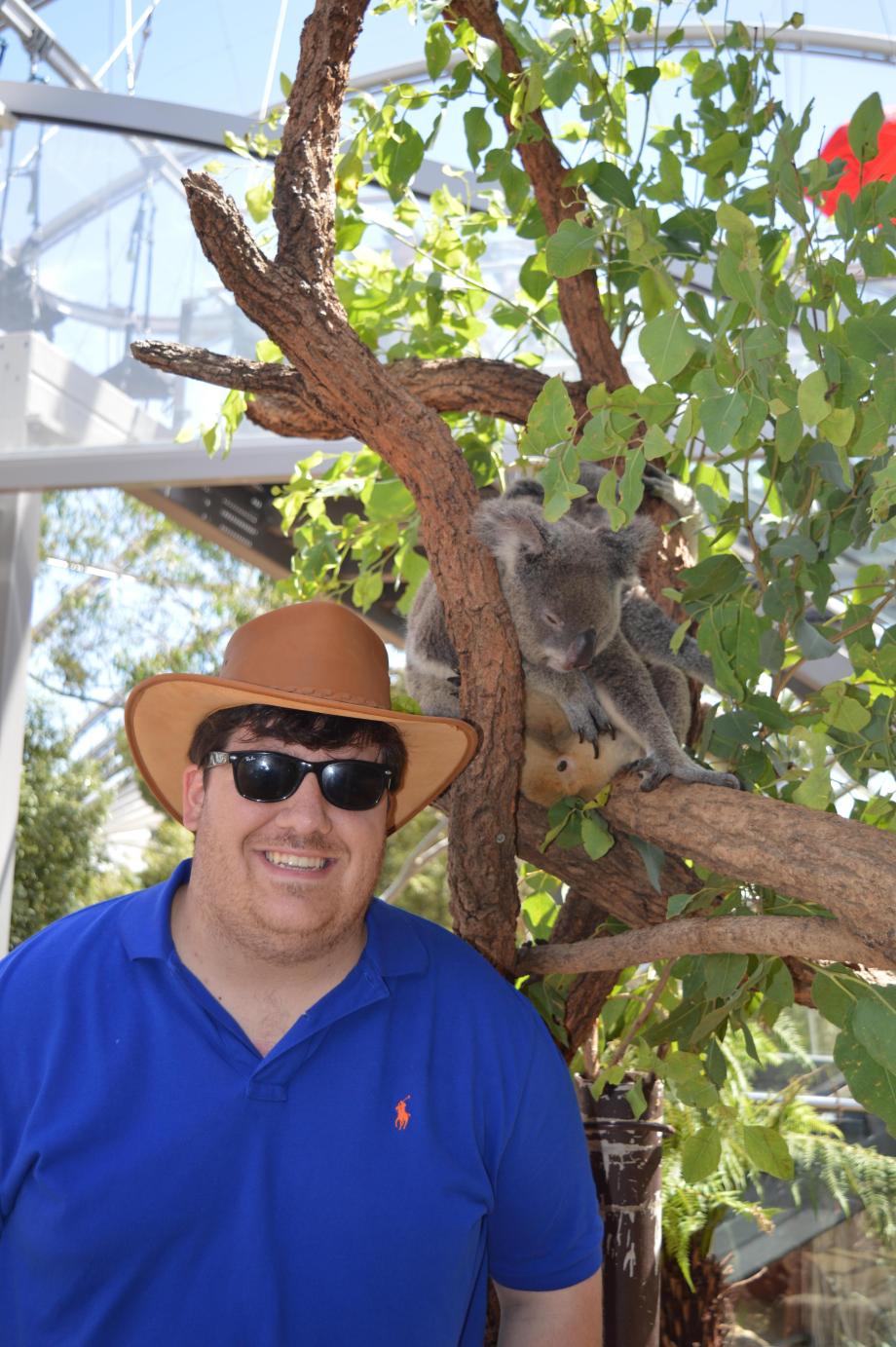 We left rather giddy after getting to meet the koalas up close and personal. Sadly, you aren’t allowed to touch them because it is illegal in New South Wales. I’ve researched and found a place in Queensland where you can pay to “cuddle” a koala, but they are kept on a very strict schedule with every third day off, and only 30 minutes of cuddling per koala each day. I think I could handle those working hours.

And something fun to round out this post– follow me over on Snapchat (add me: Ems1187) for fun, in the moment Australia updates! Thanks to my bestie D.W. for recommending I improve my social media presence.